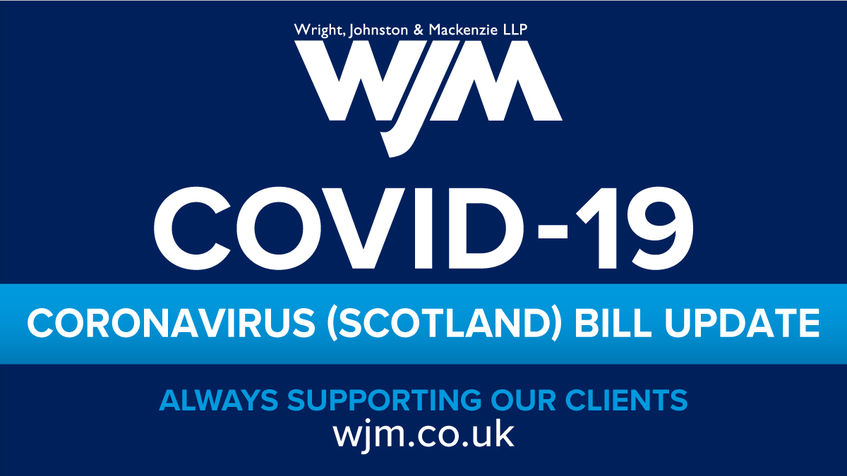 An update to this article can be found here https://www.wjm.co.uk/news/further-changes-to-the-rules-on-terminating-residential-tenancies

On 1 April 2020, the Scottish Parliament approved the Coronavirus (Scotland) Bill. The Bill contained provisions which make changes to how tenancies can be dealt with during the current Coronavirus emergency.

The changes relate to commercial and residential tenancies.

For commercial tenancies, there is a change to the Law Reform (Miscellaneous Provisions) (Scotland) Act 1985, which ordinarily requires irritancy notices to be sent to tenants who are in arrears of rent, giving the tenants not less than 14 days notice before the Lease can be ended. The Bill changes that 14 day notice period to 14 weeks, meaning that tenants of commercial premises who fall into arrears of rent during the Coronavirus emergency cannot be removed from the premises for that period. During that period, if the tenant brings the arrears up-to-date, the termination of the Lease cannot proceed.

The new Bill also introduces transitional arrangements, by making clear that the 14 week period applies whether or not the arrears started to accrue before the Bill comes into force, so if your tenant is already in arrears, the 14 week period will apply. Similarly, if you issued an irritancy notice under the old 14 day provision, that notice is automatically void unless it had already expired by the time the Bill comes into force.

In terms of the Private Housing (Tenancies) (Scotland) Act 2016, any new residential tenancies created in Scotland after 1 December 2017 are to be PRTs (unless the tenancy fits within a specific list of exceptions, such as where the landlord also resides at the property, or it’s a student or holiday let).

An attempt to require the Tribunal to consider whether “exceptional” or coronavirus-related circumstances apply was not approved by the Parliament.

Other changes are made to the period of notice to be provided to a tenant if the landlord wants the tenant to leave on one of the grounds in the 2016 Act. The current rule is that the landlord can serve a Notice to Leave on the tenant, with the notice period being either 28 days or 84 days, depending on the circumstances.

The new timings will be:-

So, taking these changes together, if the tenant in a PRT falls into three or more consecutive months of arrears, it remains possible to terminate the tenancy, but if that is the only ground for termination then the notice period has to be 6 months (effectively, 9 months after the tenant first falls into arrears), and further the Tribunal has a discretion about whether to allow the tenancy to be terminated on that basis.

These are tenancies under the Housing (Scotland) Act 1988 which last no more than 6 months. In consequence, there are very few left, following the 2016 Act coming into force, but there may still be some which are continuing on an informal basis.

The old rule about terminating a SAT was that they could be terminated at their “ish” (ie. their natural expiry date) simply by serving a notice under Section 33 of the 1988 Act. The Tribunal, in that event, would be required to grant an order terminating the SAT and allowing the tenant to be evicted. The new Bill now makes it a matter for the Tribunal’s discretion as to whether the SAT can be terminated simply because it has expired, and before making such an order, the Tribunal has to satisfy itself that it is reasonable to do so.

The changes also mean that the old “mandatory grounds” for termination of a SAT are changes, so that, while the grounds for termination remain the same, the Tribunal now is not to make an order for repossession unless it considers it reasonable to do so. Like with PRTs, therefore, the old rule that three months of arrears is sufficient on its own, will no longer apply – the Tribunal will have to be satisfied on reasonableness grounds.

These are domestic tenancies under the Housing (Scotland) Act 1988 which are not SATs. These can normally be terminated by the landlord giving a notice of proceedings for possession, setting out the ground(s) on which termination and possession are to be sought. The notice period to be given is either two weeks or two months, depending on the grounds being relied upon.

The changes here are to introduce three new notice periods as follows:-

• Two months – if the only ground for termination is where suitable alternative accommodation is available to the tenant.
• Three months if the ground for termination is that the landlord wants to resume possession of the property as his only or principal home, or where the tenant is engaged in anti-social behaviour.
• Six months – if the ground is any one of the others mentioned in the 1988 Act, including non-payment of rent.

The final provision is to the effect that, if a landlord issues a notice such as any of the notices discussed above, but the notice does not take proper account of these changes (ie. if they are in the “old” form or give the “old” notice period, etc), then the notice is not invalid for that reason alone, but is to be read as if it gave the correct information, and proceedings cannot be raised until the “correct” date as per the new legislation.

As with all of the emergency legislation, there are sunset clauses meaning that the Bill will automatically expire on 30 September 2020, although the Scottish Government will have to report to the Scottish Parliament every 3 weeks on whether the provisions remain necessary, and the expiry period can be extended to 31 March 2021 if required.

Please let us know if you need specific advice on your own circumstances.